There are essentially 3 alternatives for treating any skeletal malocclusion –
(i) growth modification
(ii) dental camouflage
(iii) orthognathic surgery Growth modification should be opted wherever applicable because this precludes the need for both tooth extraction and surgery. 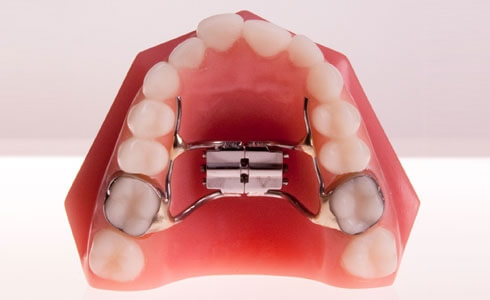 Orthopedic appliances generally use teeth as “handles” to transmit forces to the underlying skeletal structures. Basis of orthopedic appliance therapy resides in the use of intermittent forces of very high magnitude. Such heavy forces when directed to the basal bone via teeth tend to alter the magnitude & direction of the jaws by modifying the pattern of bone apposition at periosteal sutures & growth sites.

The following are the commonly used orthopedic appliances –

Headgears are the most widely used extra oral orthopedic appliances. They are mainly used in the management of skeletal class II malocclusion by growth modification. They are also used for distalization of maxillary molars.

Also referred to as chin cap. It is an extra oral orthopedic device that covers the chin and is connected to a head gear. Used to restrict the forward and downward growth of the mandible. Types of chin cups Chin cups are of two types :

Replacement of one or multiple teeth Replacing all the teeth